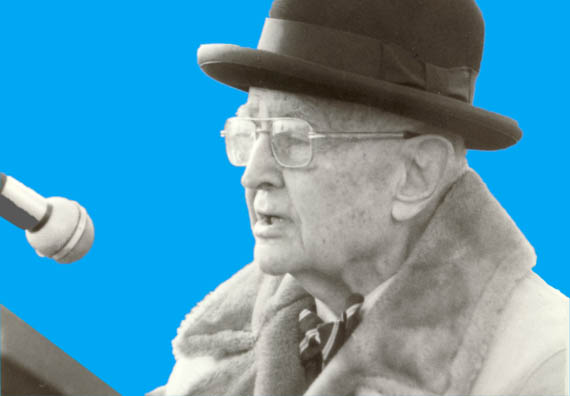 If you're looking for a speaker, the History Center staff is available for lectures and programs. We can offer them remotely via Zoom or, when it's safe, in-person at your site.

We're pleased to offer the presentations listed below to local community groups and clubs for a minimal fee. 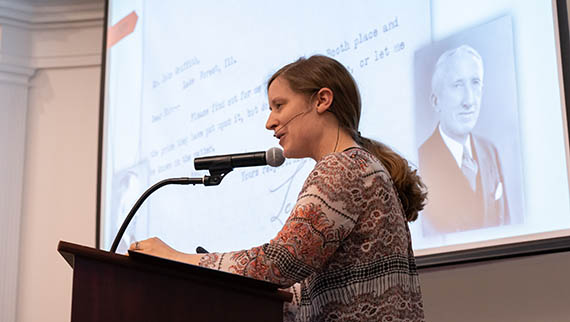 From the history of West Lake Forest, the Lake Bluff Camp Meeting and Market Square to hometown patriotism during WWI--there are a variety of lectures to choose from. If given advance notice, modifications can be made to an existing lecture to better address your specific area of interest.

Staff are generally available Tuesday through Friday - other days and evenings are subject to limited staff availability.

To schedule a lecture, please contact Laurie Stein at lstein@lflbhistory.org or call the History Center at 847-234-5253. The suggested donations for: an onsite talk (hosted in the History Center Education Hall) is $250; for an offsite talk is $200 (in-person); and for a remote/Zoom talk is $150.

West Side Stories: The History of West Lake Forest

West Side Stories focuses on the history of the part of our town west of Route 41/the Skokie Highway. Early homesteaders blazed trails and created the vibrant farming community of Everett, whose neighborhoods, schools and businesses have formed an essential part of the Lake Forest whole since 1926.

Links at the Lake: The Beginnings of Golf in the West

Chicago played a vital role in the history of American golf, and Lake Forest is where it all began. Learn about the first links on the lakeside grounds of a Lake Forest estate, hear stories about the founding of area clubs and courses, and enjoy anecdotes about local golfers and tournaments.

The Lake Bluff Camp Meeting was formed in 1875 by a group of Methodist ministers. For the next two decades, it was an important cultural destination for many, including some well-known national figures. Modeled on other meetings of the Chautauqua movement, the camp provided not only religious activities but also social, cultural, educational, and recreational programs. Though the camp declined in popularity at the turn of the 20th century, it had both a national impact and a significant influence on the future development of the Village of Lake Bluff.

More Fun Than a Yacht: The Gentleman Farm Movement

The rapid rise in urban density at the end of the nineteenth century produced nostalgia for the countryside, manifested in “Gentleman Farms.” Well-known architects designed farm complexes that were not only functional but artistic showpieces as well. This lecture recalls the heyday of the Gentleman Farm movement, focusing on local examples in Lake Forest and Lake Bluff.

Take a trip back to the Lake Forest of over 100 years ago. In 1916, Market Square was just opening, local Red Cross groups were forming to assist the European war effort, the Marion Lambert murder trial was dominating local and national headlines, and author F. Scott Fitzgerald visited Lake Forest to see Ginevra King.

The story of a major polo event hosted by Lake Forest's Onwentsia Club in 1933 that shook the foundations of the sport and captivated the sporting public.

At its beginnings, Market Square broke new ground. In 1916, as the nation’s first artfully designed shopping center, it linked pedestrian, automobile, and train, and heralded a new era in urban planning. It completely revolutionized Lake Forest’s business district from an afterthought to a focal point of the community. This presentation highlights the shops, people and events that have made Market Square into such a unique place for the past century.

With Great Lakes Naval Station to the north and Fort Sheridan to the south, it is no surprise that the towns of Lake Forest and Lake Bluff were highly active during America’s involvement in World War I from 1917-1918. From sending soldiers overseas to dedicating Market Square, Lake Forest and Lake Bluff were witnesses to years of sacrifice and change. Their efforts did not go unnoticed, as The Chicago Evening Post would eventually label Lake Bluff as “the most patriotic town of its size in America.”

This talk presents a snapshot of Lake Forest during the 1920s, spotlighting connections to Irene Castle, the original flapper, and that quintessential voice of ’20s youth, F. Scott Fitzgerald. It was an era of growth, grand homes, and golf, but also of great social transformation. Focus will be given to what changes the decade wrought – and what it did not change – in the lives of local women.

From Gowns to Gavels: The Life and Work of Virginia Fiester Frederick

Virginia Fiester Frederick’s fashion design career began in her Lake Forest basement with outfits for her own children. It reached its pinnacle at no less of an address than 1600 Pennsylvania Avenue, when her designs were commissioned for a White House wedding. Her political career also began locally, as the first woman alderman on the Lake Forest City Council, and ventured south to Springfield, where she served for 16 years in the Illinois State House of Representatives. The program was made possible by a generous grant from the Market Square Questers.

Lake Forest in the Flu's "Grippe": The Local Response to the 1918 Influenza Pandemic

This talk examines the local landscape during the 1918 influenza pandemic, with snapshots of the response in Lake Forest, the surrounding North Shore communities, and in Chicago.